The question is, what do you see the first in a person? Of course, the answer would be, the outer personality. Similar is the case when we see a building or a concrete architectural structure. First, exteriors of it are seen, and then it gives a notion to make a decision whether to enter the building or not? If the exteriors are good then people are likely to get in and then experience the interiors. On the other hand, if the interiors are good, but the exteriors are not, still people avoid to get in because on seeing a bad exterior, the decision is already made not to go in, no matter, how good the interiors are. This applies in each and every business and in the service based industry. 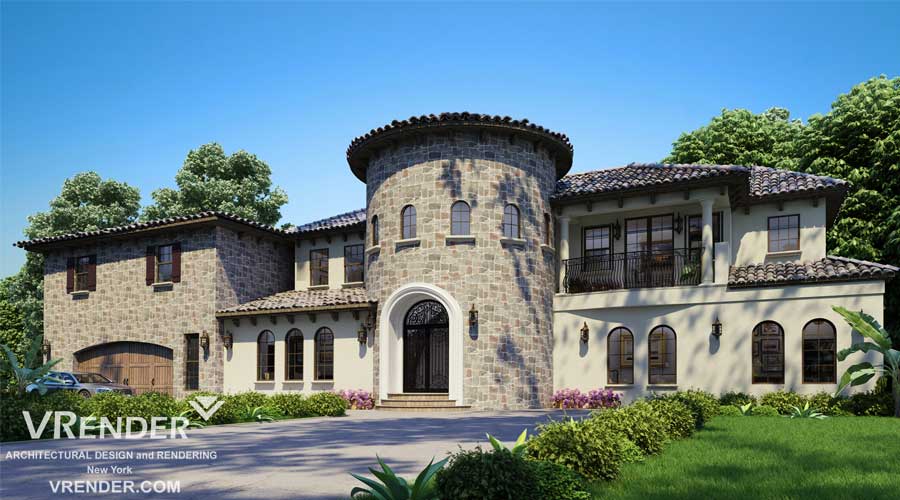 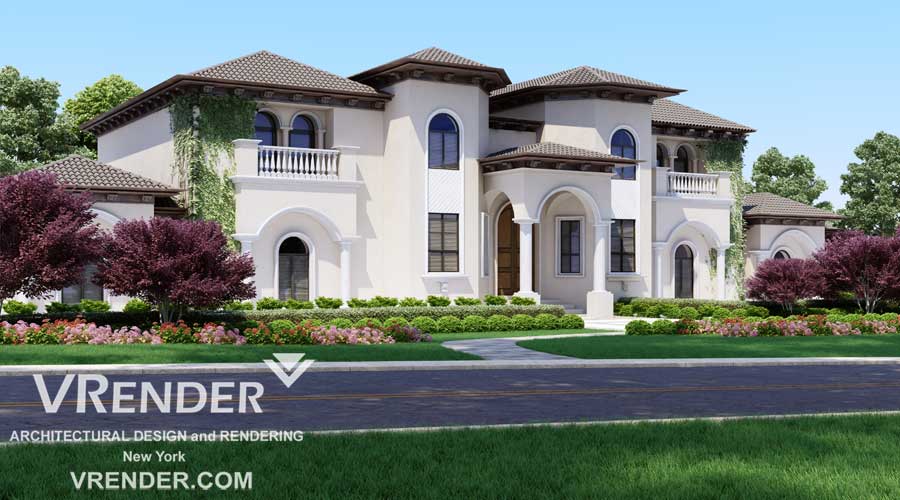 The U.S. is the leading nation in having thousands of businesses and lakhs of buildings. For all these businesses, service industries and buildings the Exterior Rendering service is required. To cope up with the demand, there is a lower supply of 3D Exterior Design and other CGI Design services. And, out of these, only a few of the design service providers are able to give their excellence. Therefore, to meet up the demand of the exterior engineering and 3D Exterior Rendering services, Vrender Company does everything in time mannered. 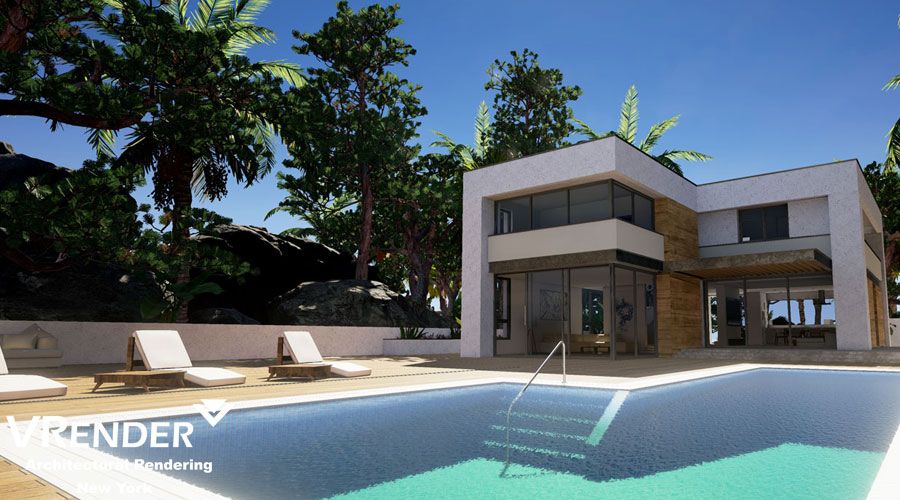 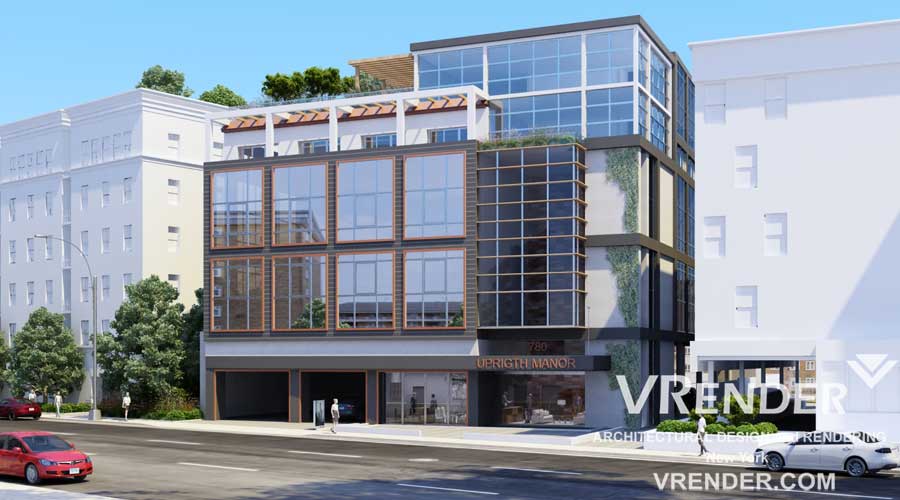 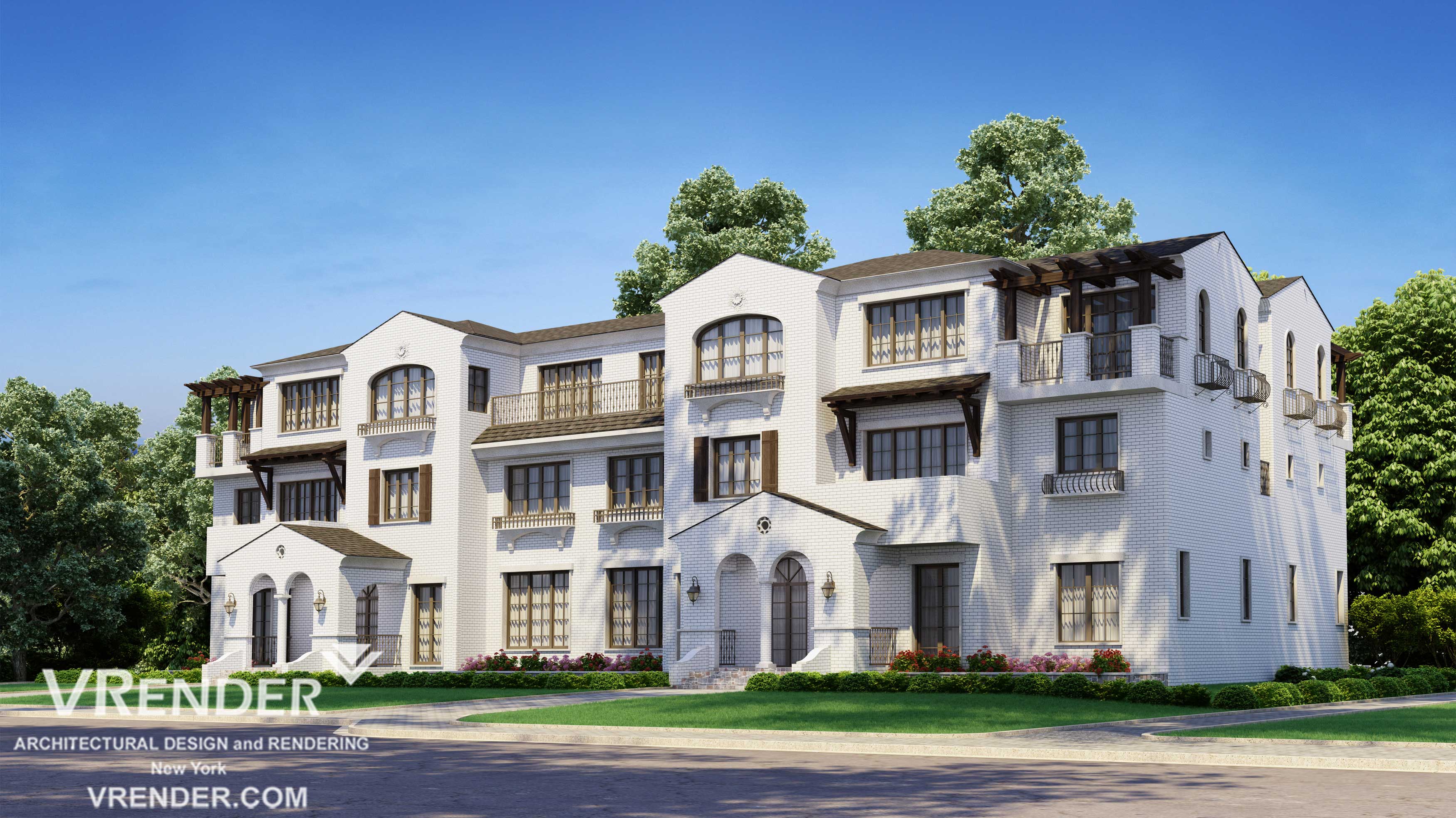 3D Exterior Rendering for Commercial and Residential architectural objects require a lot of attention on the amenities and the surroundings. The 3D Exterior Design Studio that we have is one of the most effective and loaded with all the technological tools required to create outlasting designs. Industrial Exteriors require typical attention on the functional parts and must showcase how the operations are handled in the industry.

This invokes the needs of the Exterior Rendering as well as the Interior Rendering for 3D Exterior Industrial Rendering Animation to be the most reliable on showing how the industrial job will be handled at that particular industry. This concludes that each and every type of exterior rendering requirement gets changed with the application. Each would require care and understanding of the functional and non-functional elements also. Therefore, VRENDER has experts who are keen on exploration and are sound in using technicalities of animating the exteriors as they are required.

3D Rendering (visualization) of construction, architectural objects of real estate and interiors allows presenting a full-fledged image, an impression of a future building or space in the smallest detail. The three-dimensional graphic is used in those situations where there is a need to see how the material will look in the interior, or the future real estate on the site, or where and how to place pieces of furniture or small architectural forms on the site. If to make the visualization of the object, it is possible to see the smallest details as realistic graphics and estimate all the positive and negative points before the construction or repair begins. 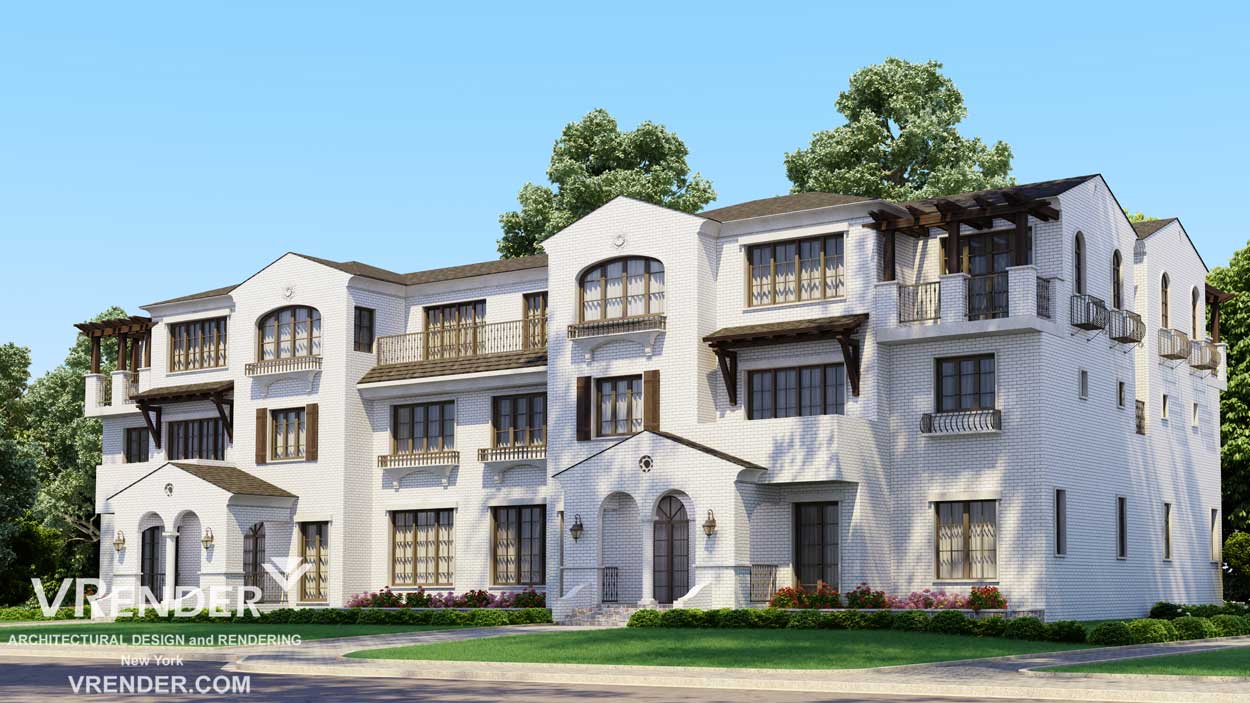 Rendering of objects is used most often by construction companies, developers, investors, and specialists whose activities are related to the commercial real estate. Today, every third developer applies 3D visualization. A realistic image of the future building, its architecture and landscape help find investors and future buyers who can visually see where and how everything will be located and to see its look. 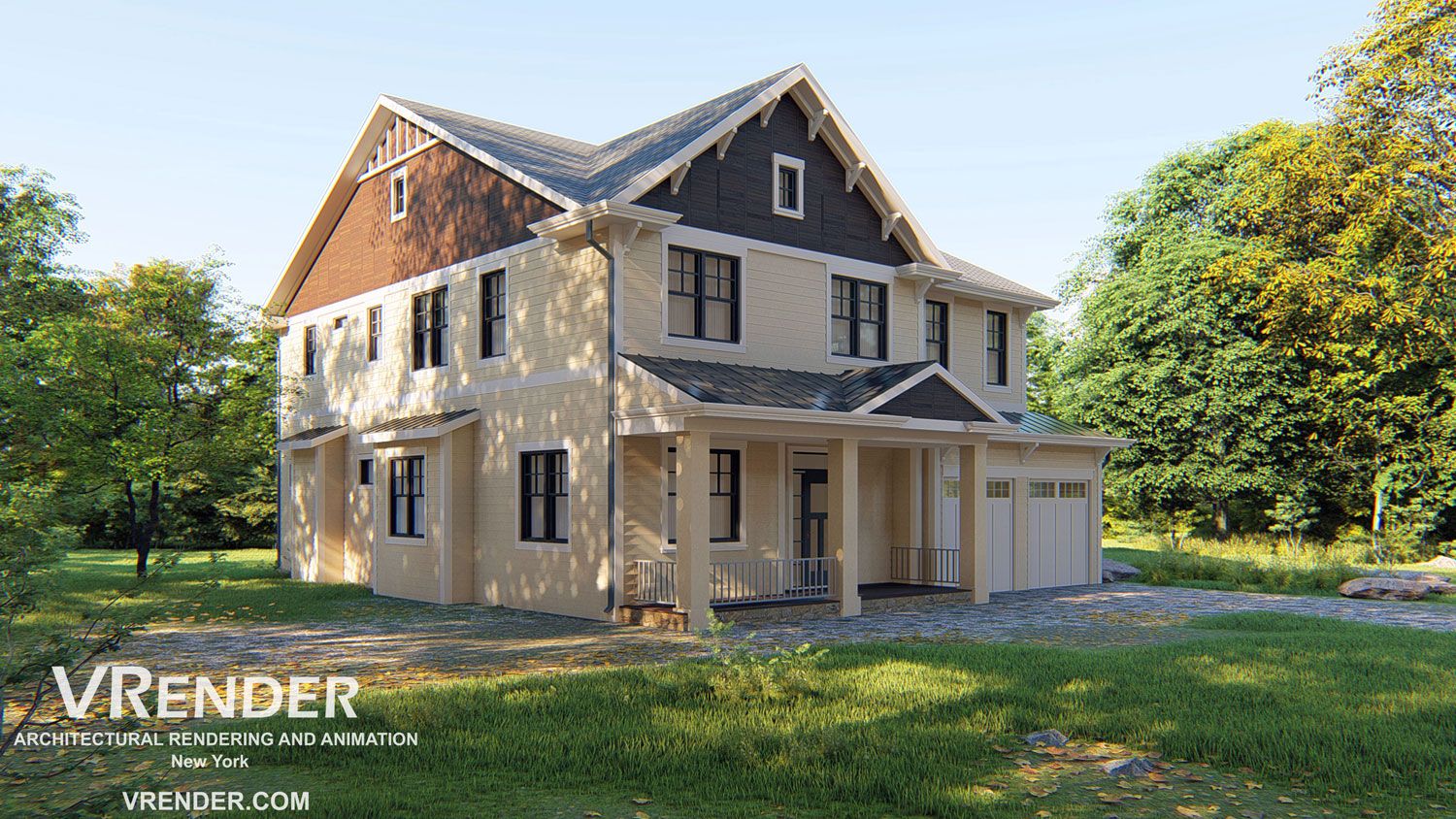 3D visualization of the exterior is done using the special software, which is able to present the object in a three-dimensional shape. After all, the customer can see a realistic image, which can be corrected during the discussion and agreement process. For example, the color of the façade can be changed or the texture of the material used, the adjacent territory can be shown in another design, as well as the angle of the pitch of the roof or elements of the drainage system can be altered. Rendering of an object is becoming more popular every day.

Thanks to the three-dimensional graphics, it is possible to make the project of the object and subsequently implement it in reality. At the same time, if to put appropriate tasks to builders, the erected building or the created object will fully correspond to the 3D visualization model that was created at the design stage. 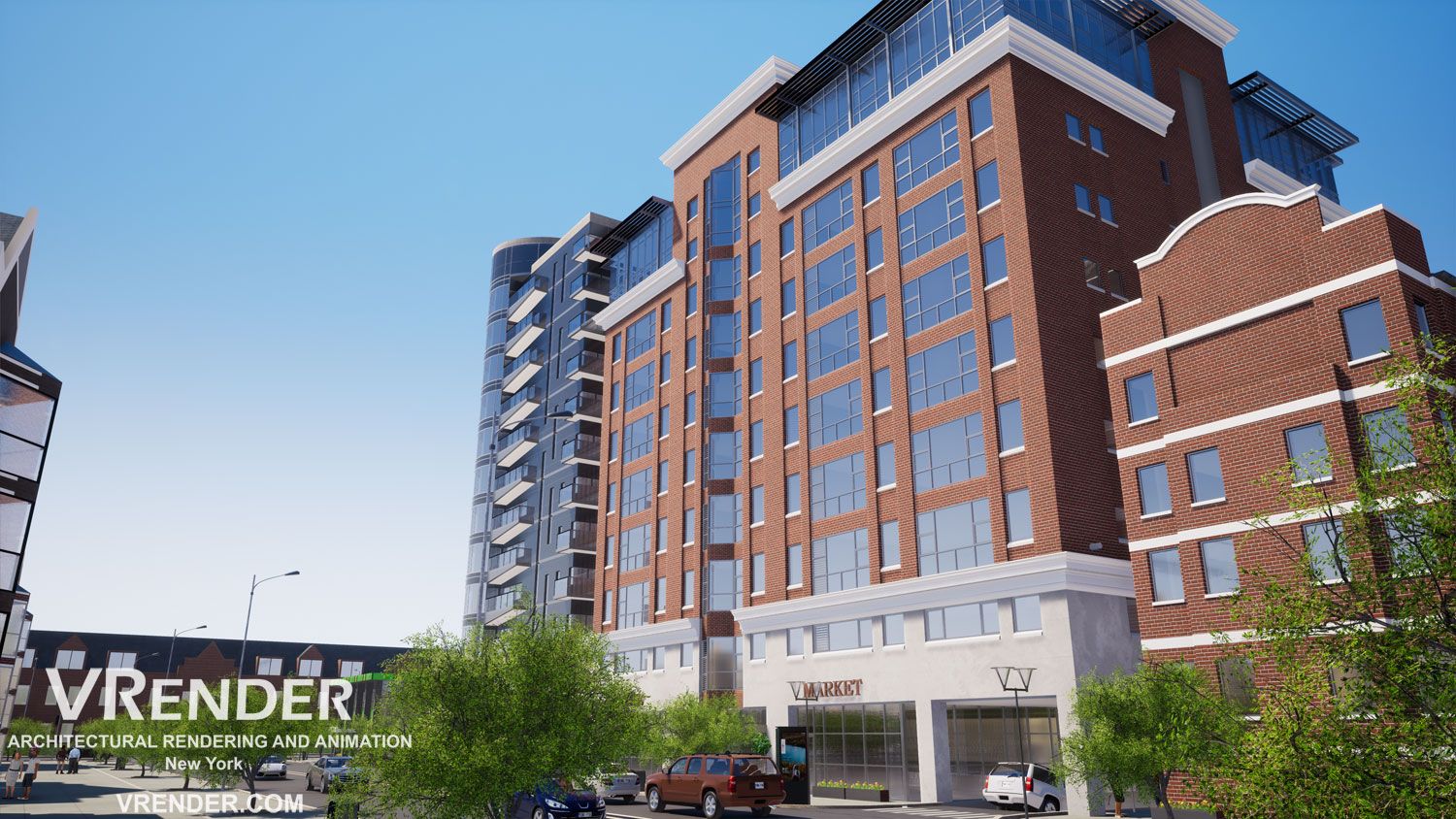 How the process of 3D visualization occurs?

Visualization of real estate objects or industrial buildings is a complex process, but only with its help, it is possible to “delve” into the ambiance of the object. Creating a three-dimensional image begins with the geometry of the object. In 3D modeling, it is the first stage. Every detail and element of the real estate object is thoroughly elaborated; therefore, the most time is spent there.

The object’s rendering is the final stage of visualization. The result is a three-dimensional space in which it is possible to display the proportions, colors, and shape of the object. After the rendering, all the elements are seen, including lighting, layout, communications and so on. A ready-made three-dimensional image can be printed and demonstrated to investors or customers at the presentations. 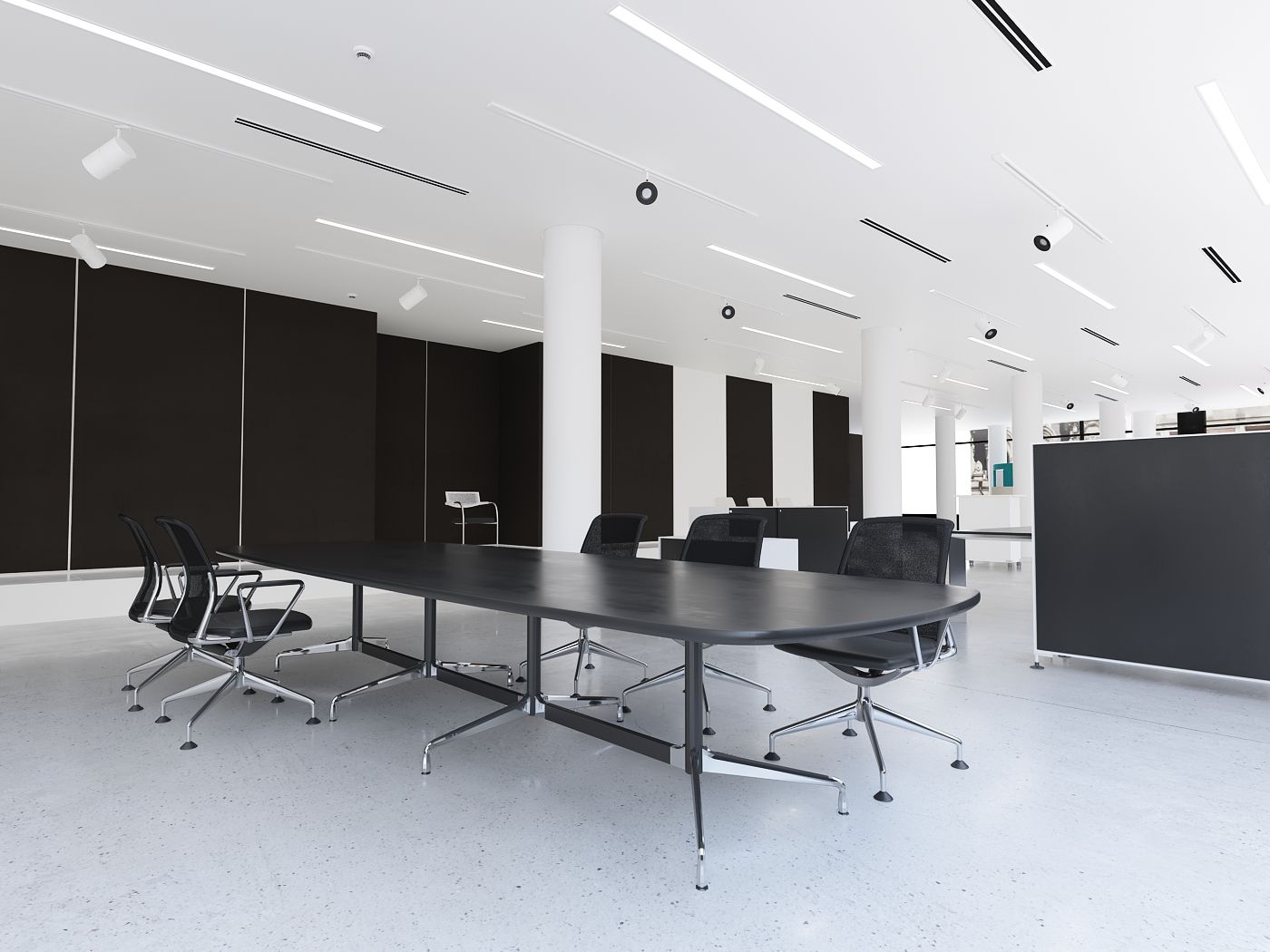 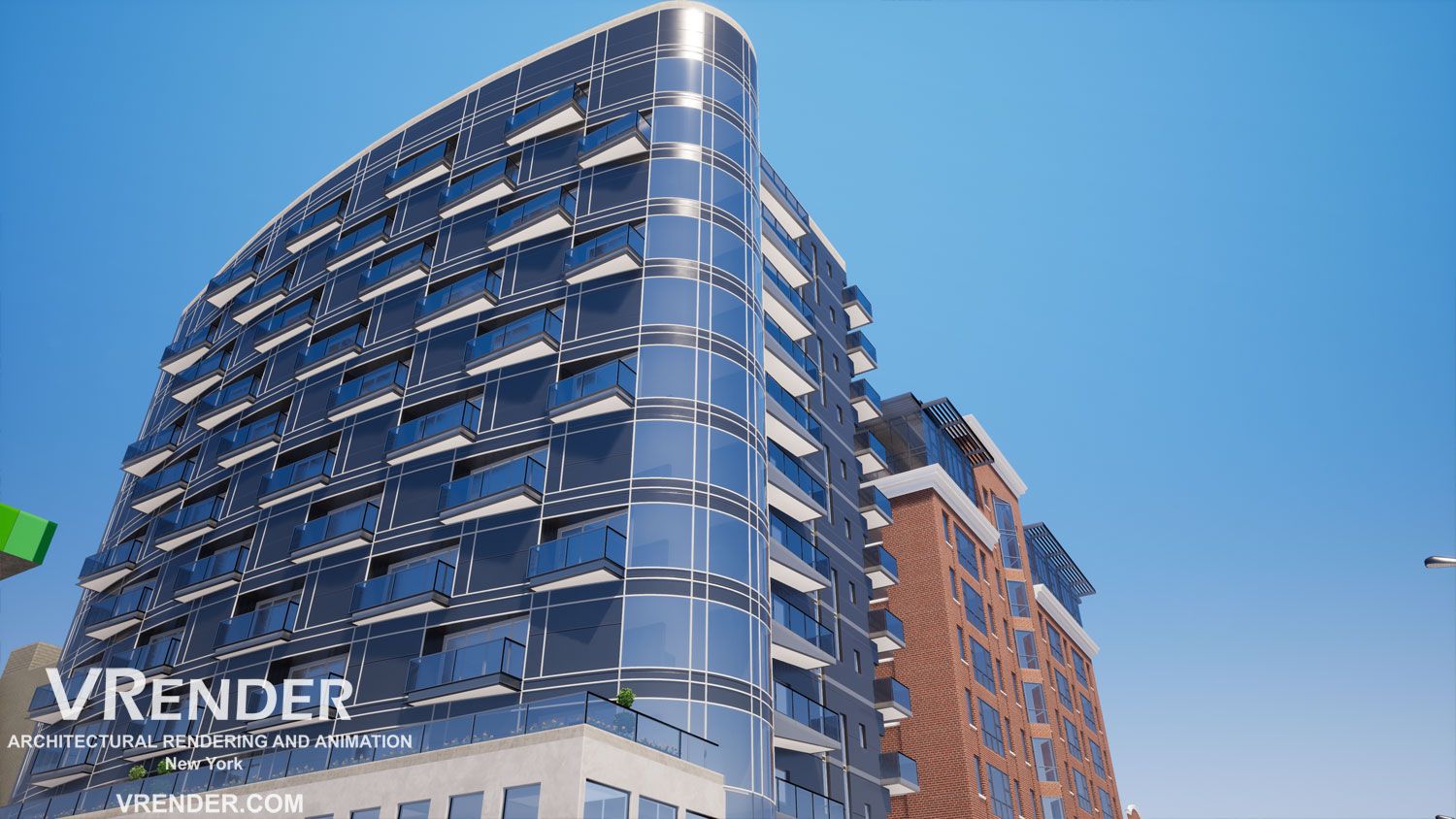 3D visualization can be done at an attractive price in our company. The cost of architectural visualization depends on the complexity and a number of additional factors, including the area of the space, the number of floors, rooms, the difficulty of architecture and general layout of the building

The price for visualization of the exterior, architecture, and interior in our company is not overstated and is completely available to all customers. Following the request of the customer, we can create a three-dimensional project as a layout, as well as a 3D movie with a realistic image of the object.

3D visualization is a three-dimensional display of an object with a high resolution.

Quality work is indistinguishable from a photo. With the help of visualization, it becomes possible to evaluate and, if necessary, correct the architectural design before the construction works begin. 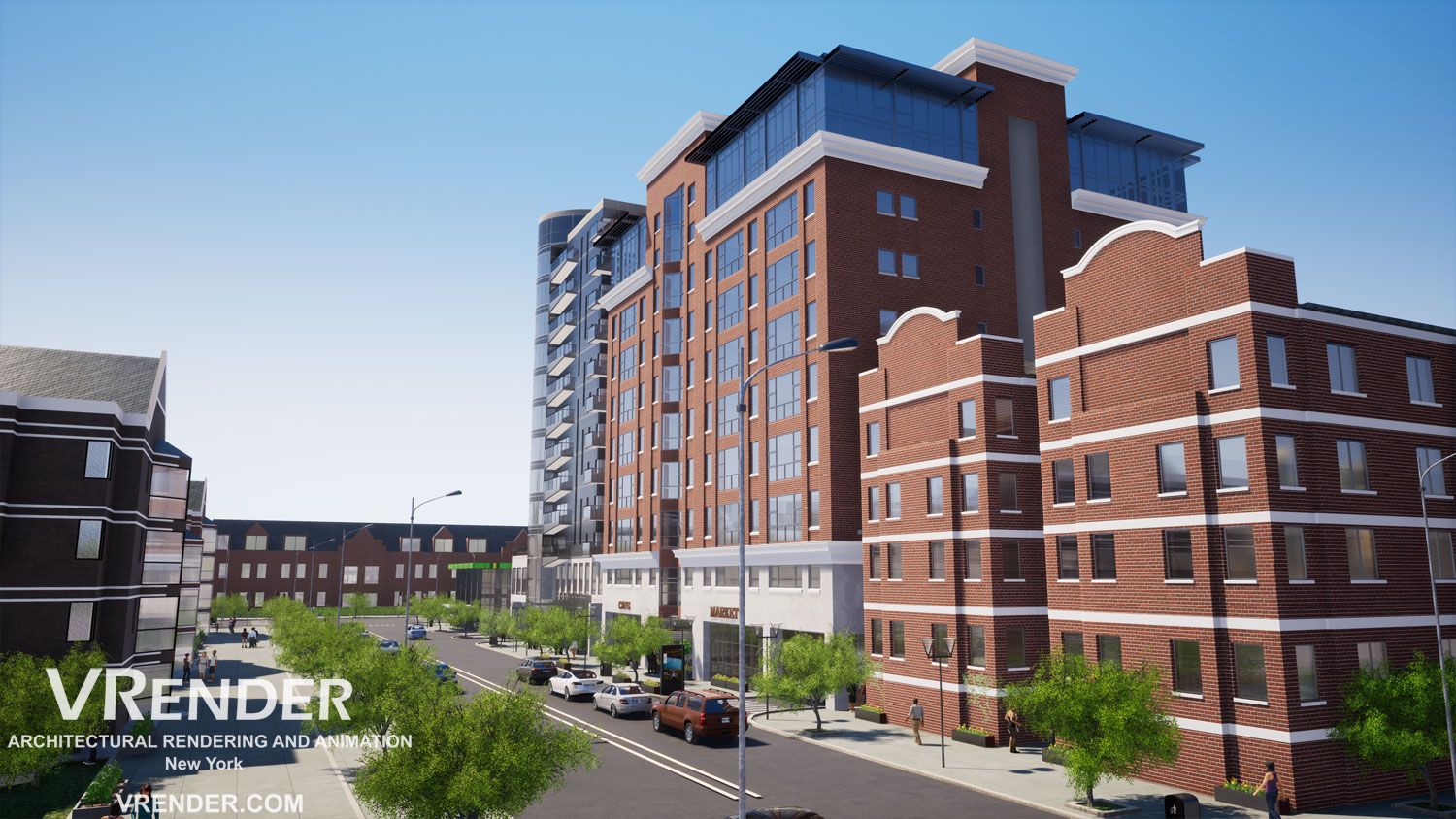 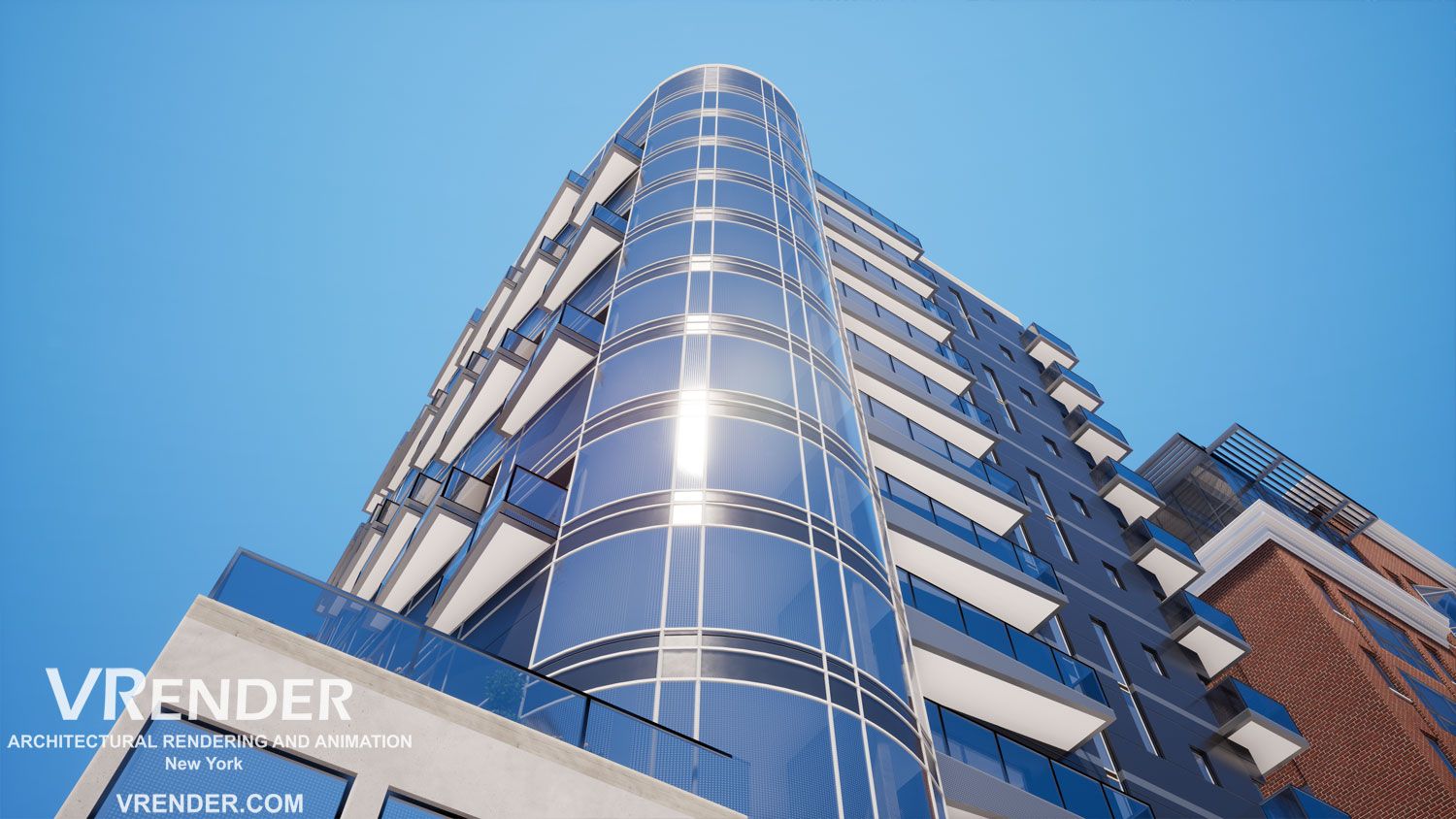 Along with that, it is possible to change the geometry, color decisions, structure, texture, estimate how different materials are combined. Thus, visualization saves time and resources. These are far from all range of tasks that can be solved using it.

Increase sales. Only some clients can estimate the future object based on drawings and blueprints. Quality 3D visualization of a house is the key to the success of sales already at the design stage. The customer buys not a project but a beautiful three-dimensional image, which allows seeing the future result of his or her financial investments.

Increase investments. Architects almost never occur among potential investors. These are people who have money but not necessarily have spatial imagination. When the project is submitted as the 3D architectural visualization, it is much more comprehensible than even the best drawings, diagrams and blueprints, which in turn, impacts positive decision-making at the subconscious level. 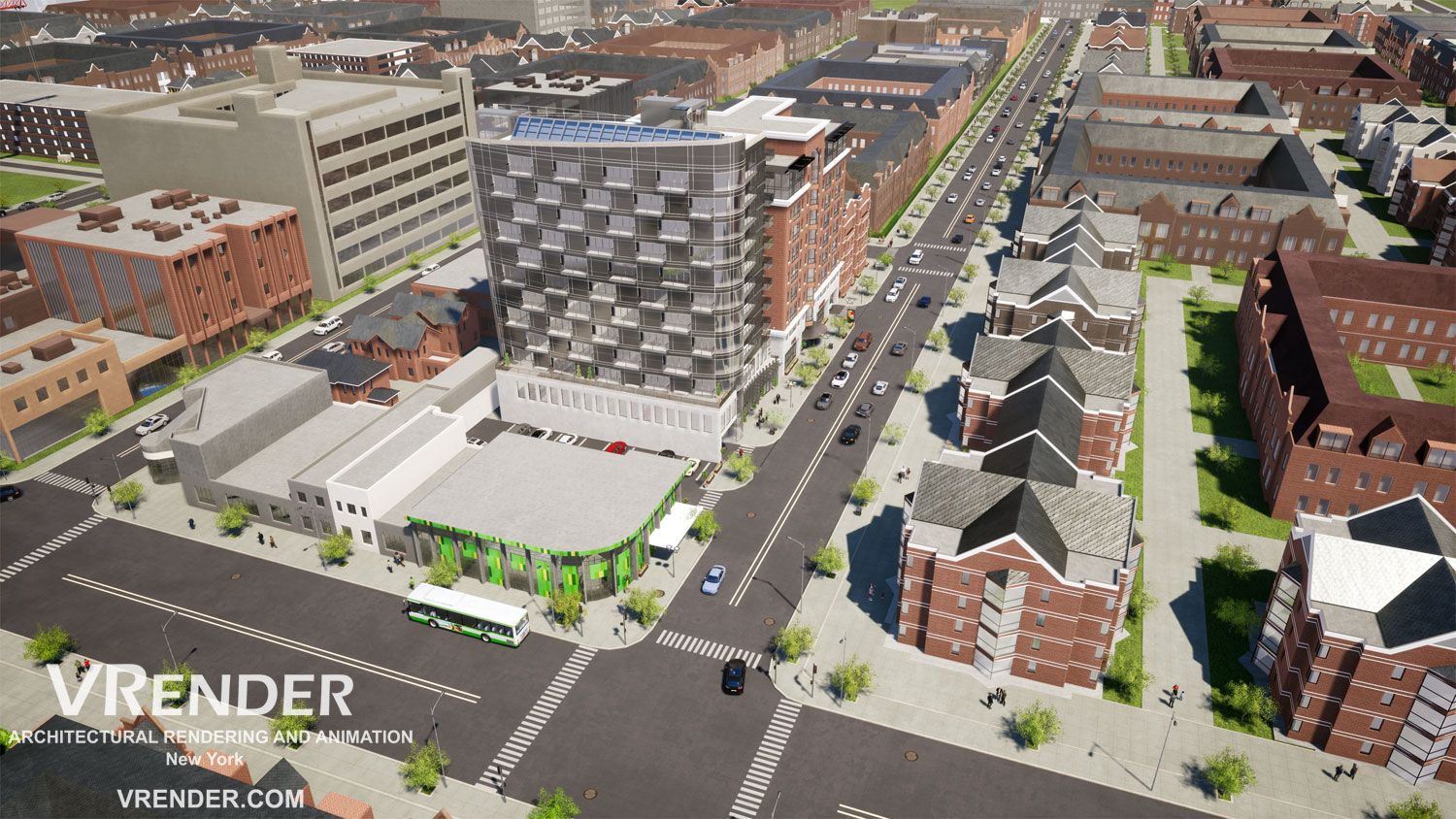 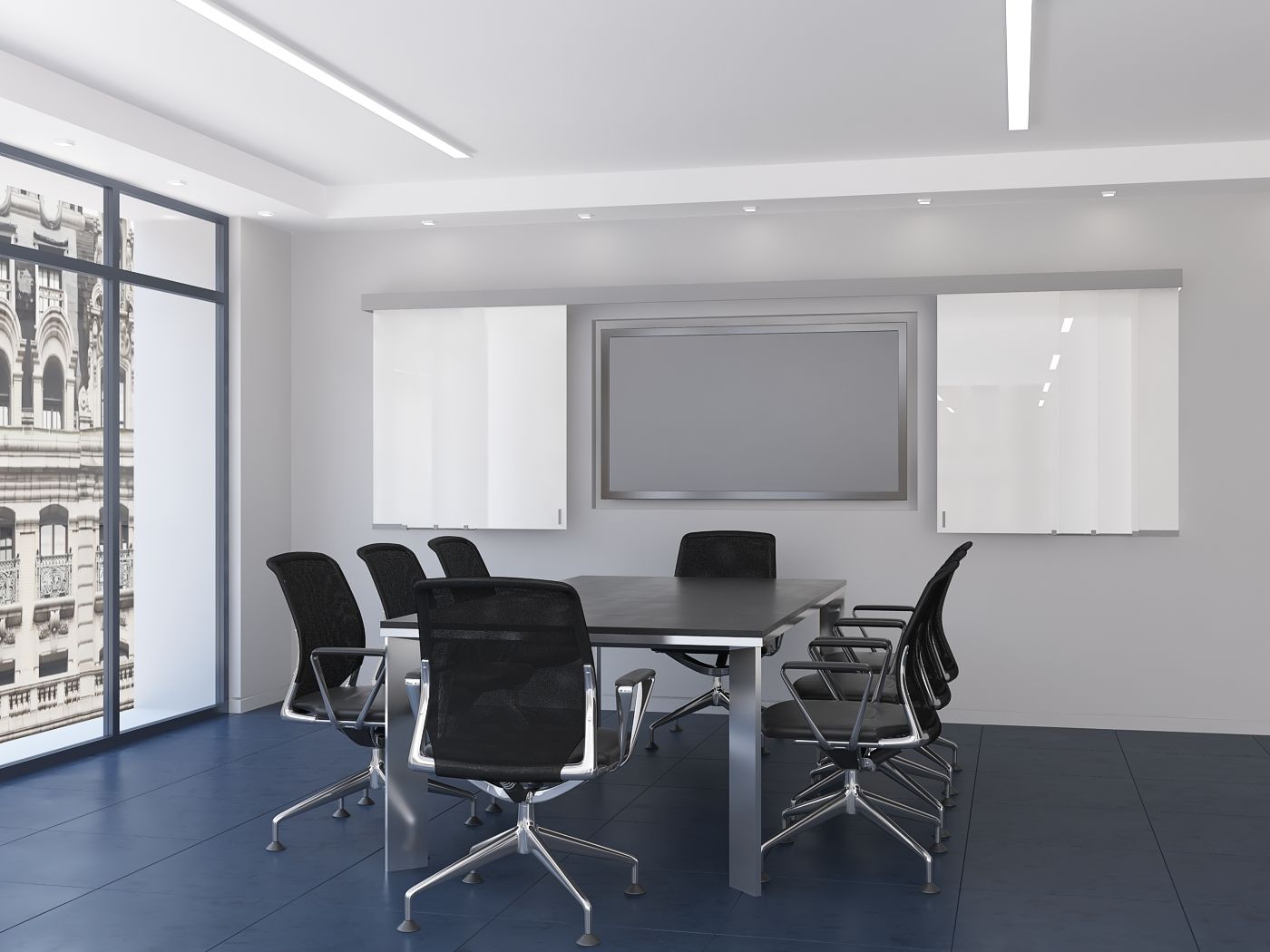 Use images in advertising. 3D objects can be included in promo campaigns, presentations, images on big banners. With their help, it is possible to implement all kinds of advertising companies that increase sales growth and compensate for the advertising costs.

Save money. 3D visualization allows seeing, evaluating, and finalizing the project at the early stages, avoiding mistakes and additional costs in the construction process. Potential buyers can evaluate the technical and aesthetic characteristics of the facility, make comments and suggestions, which will also be taken into account before construction begins.

3D Rendering of houses and cottages is required in order to create a complex model of a building or an object in the real time and in a real environment. 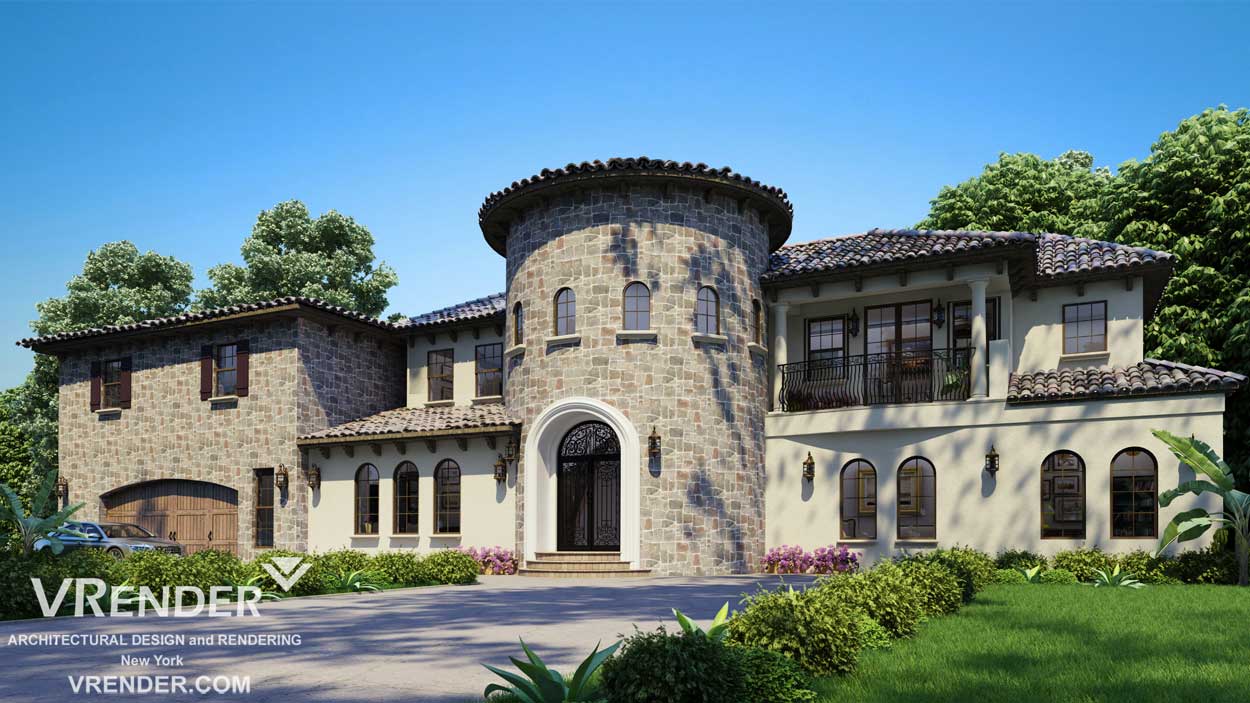 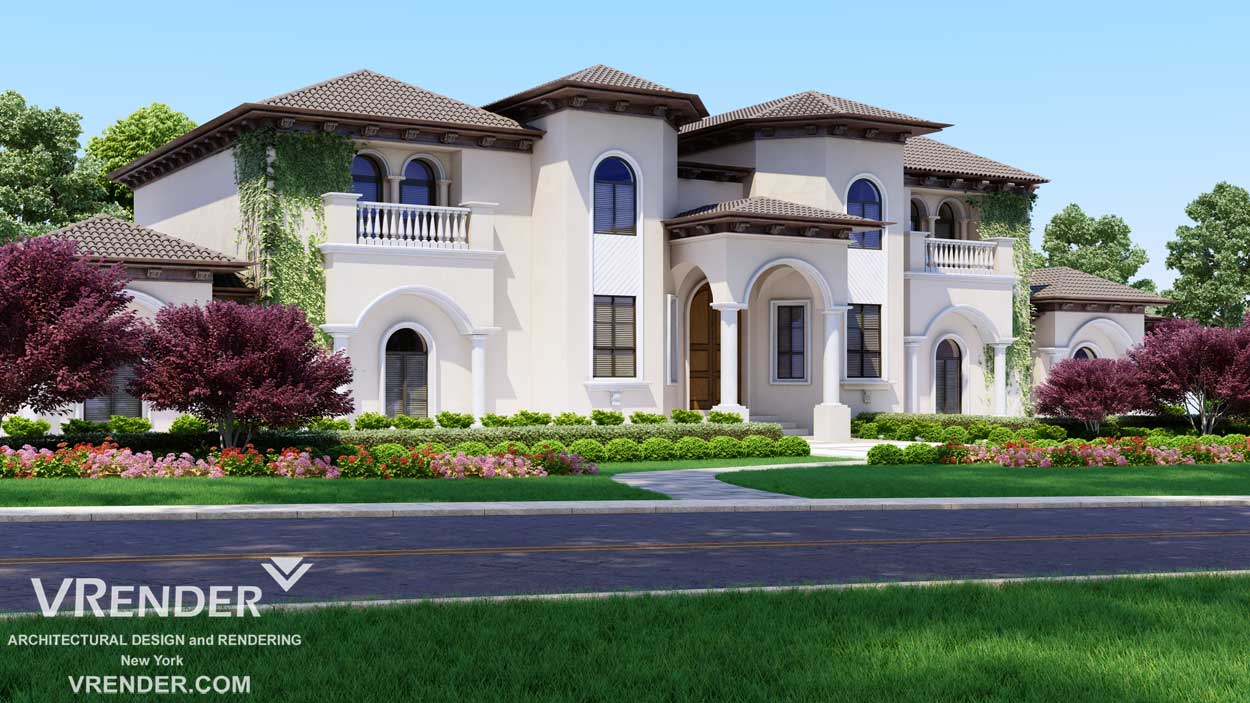 With 3d visualization of residential property like Cottages and Bungalows, lodge, Country House, Villa, Apartment Houses, Old House Neighborhoods, Lake view House, Guest and Beach Houses, Bay and Garden Cottages, Vacation Rentals, we put emphasis on a combination of natural conditions and architecture, trying to immerse a person in a sense of calmness and relaxation, which we all are looking for. 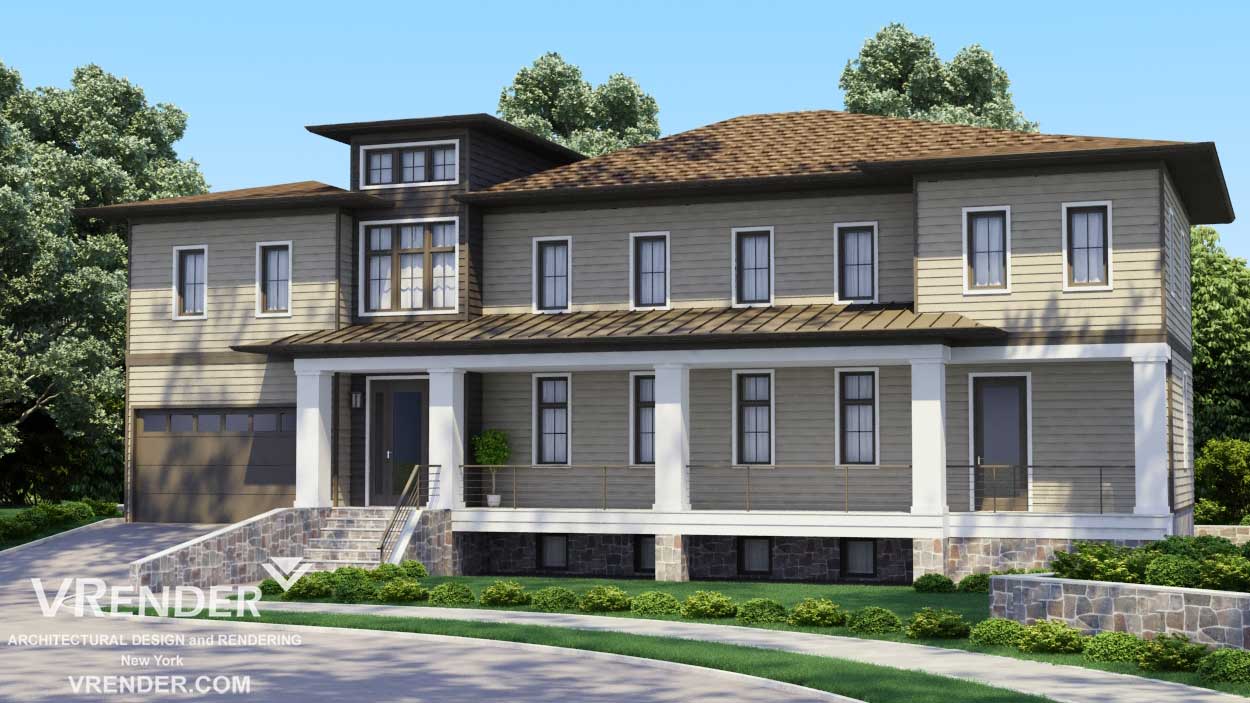 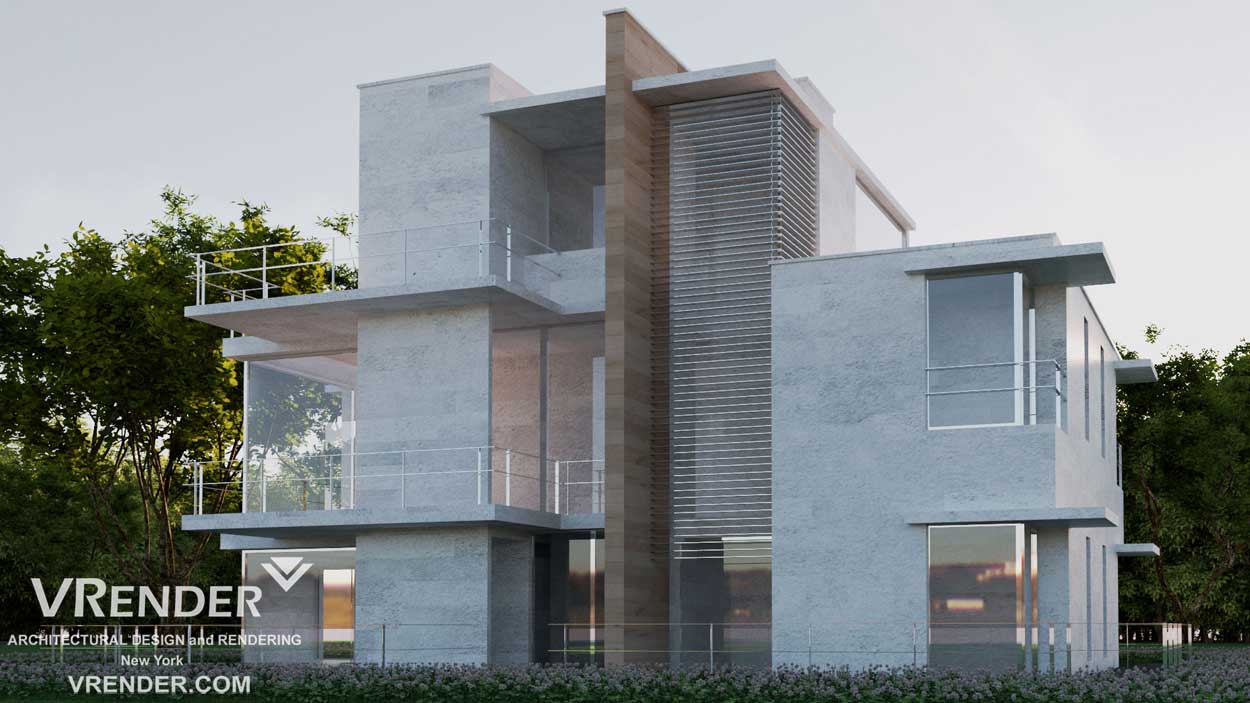 There are many types of country residences: from private villas with their own hunting area to small minimalistic houses in the forest. Whatever your project is, you can be sure that we will select the right entourage, which will put an emphasis at all the advantages of this project and gently invite the viewer to go on a journey or take a stroll through the territory.

In addition to that, a spectator will receive an excellent understanding of what is happening at each design stage, what will be the layouts and what the facade will look like in different lighting conditions. In addition, it is possible to see the feasible problems and shortcomings in the design and fix them before the implementation of the object begins. 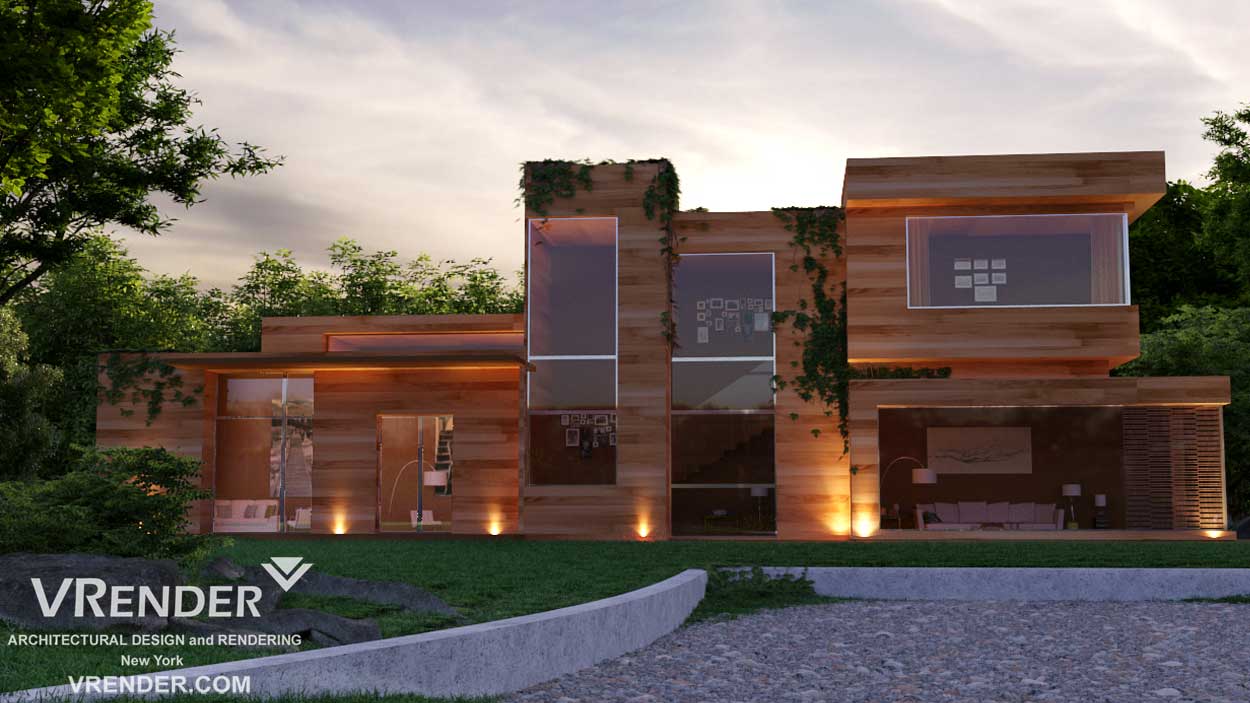 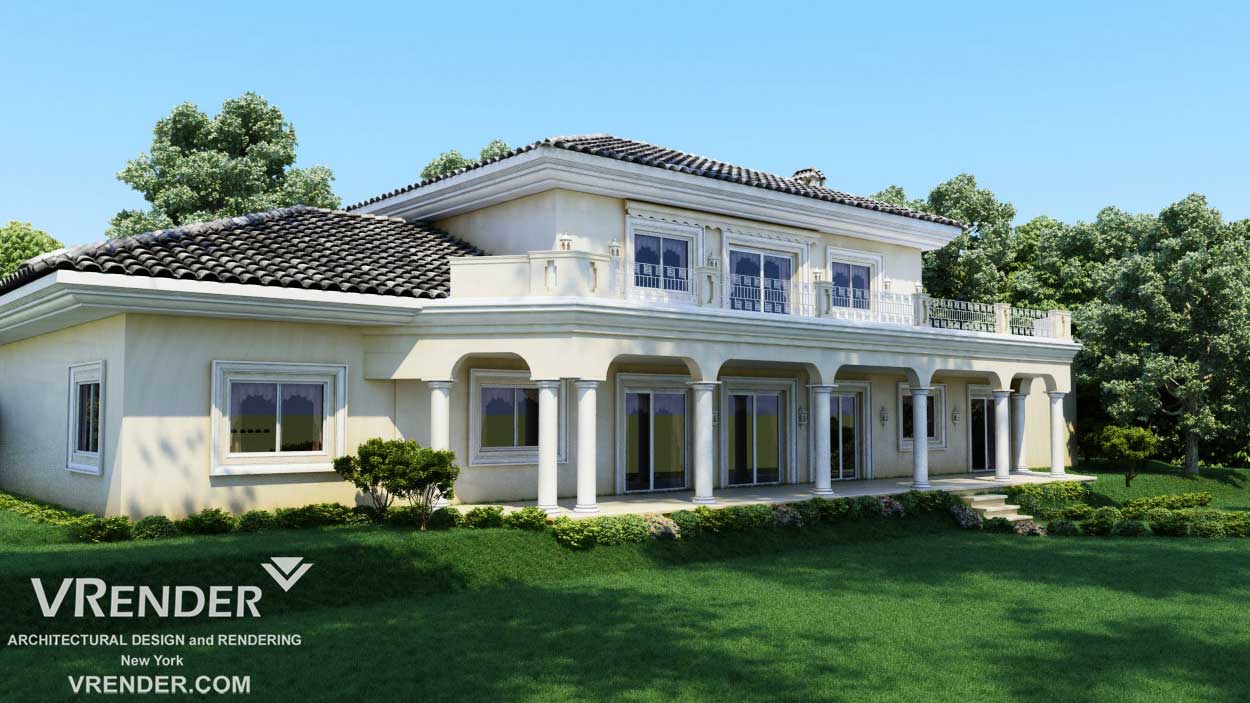 As well as in all other types of 3D visualization, the technical part does not require detailed explanations, since its highest quality includes the complete elaboration of textures, setting lights, post-processing of the images. You can see more by visiting the section of the site with our works.

You can order the 3D rendering service of house design using the contact form below: